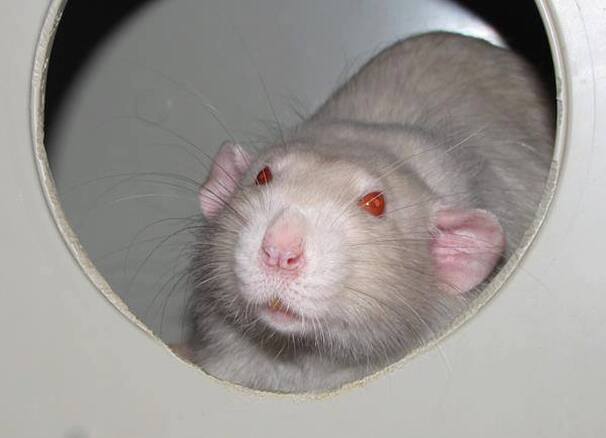 What is a Moon rat?  Understanding the Genetics, Theories and Origins of the 'Russian Moon' Rats
Overview: This page is dedicated to the understanding, recording and discussion of the unknown rat genetic puzzle we refer to as 'Russian Moons', or 'Moons'. While our understanding of the variety certainly has improved from more than 7 years of test breedings, the true genetic makeup of what makes the Moons a 'Moon' is yet to be fully determined. I intend this page to be a way for other breeders interested in this variety to have a go to point for information on them as well as a place to talk about theories on the origins and genetics of it as well as a way to keep everyone updated on new findings. I caution that this is not a new variety declaration page (until further evidence supports that claim).

The Physical Descriptions: Phenotypically (the physical outward appearance) typical of this variety is a bluish/beigish shimmery off white coat color, pink to ruby eyes. There does seem to be some variation in the variety depending on what the breeder had selected for and what else is going on within the line. The Moons here at Px seem to have more of the beigish hue and darker red to ruby eyes where as the ones at Bellaratta's Nest (BN) have more of the icer/bluer hue and pinker eyes. Another aspect that seems to be connected, though not necessarily genetically linked, is a difference in the coat itself. The name "moon" originated from the first moon rat the showed up in an Apr 2005 litter named "Bella's Moon" as well as the color looks like that of a shimmery full moon.

Notes on the Emerging Coat Type: An additional note on the moons is the emergence of a very soft fluffy 'plush' coat where the guard hairs are just as soft as the soft downy under coat and slightly reduced. I have seen this new fur type in the russian moons and with the russian blues so it does not seem tied directly with whatever mutation is causing the moons specifically but possibly with the line and even more so possibly a new or re-emergence of a fur mutation type. I currently have 3 females with this fur type and have yet to see it on a male but have heard of one appearing at Heart of Texas (HOT) Rattery. Another note about this fur type is the difficultly of seeing it at early development, typically it emerges at maturity and later (3-5 months) and becomes more pronounced (shorter, more 'plush') as the rat ages. It also does not completely show in all the pups in a litter, usually its only a small few out of several and then randomly between generations. There are no current genetic theories outside of a resurrection of the extinct 'velvet' coat or a strong double coat as of yet on the new fur type but samples of fur have been sent to two independent sources to take a closer look at it under the microscope in late 2012.

Genetic Theories:
Along the way, we have been entertaining several theories as to what is "Moon" from a genetic standpoint. Here are the previous theories up to the newest ones. As we test and work more with the variety, we will better be able to eliminate some and come up with new ones. We encourage the rat community to enter in their own theories so that we can explore all options. Final Words and Thoughts: More information, further tests and additional breedings are needed to develop a working genetic theory on the 'Moons'. Additional breedings are in order as well as the emergence of genome testing possible. While each year there seems to be a new novel mutation in the fancy, the research and testing for the moons is a serious undertaking for the handful of breeders currently working with it and there is statistical significance and characteristically unique for Moon to be considered for a new variety. Where this road will led us is a genetic mystery at the moment but one worth traveling down.

UPDATES for 2020: So we've had some years to further work with and test out the variety and here's some updates with where we stand now. Current main theory is that we are dealing with a simple dilute mutation much like the red eyed dilute mutation though we don't know where it sits on what chromosome. In 2019 we have somehow brought back what appears to be mink into the J-line and we are getting Moons that are now very light, almost look albino and it is believed that these are Moons + Mink which would further support this as a single dilution mutation. We are continuing to see the more 'plush' coat show up in both Moon babies and Russian Blues. Further test breeding for us this year will include Moon x Marten, Moon x Black Eyed Gene, Moon x Siamese, Moon x Agouti. We will update this page as we and our sister ratteries do these test breedings.

Below is a Photo Gallery of the known Moon Rats and some comparisons, special thank you to the members of the FL Rat List and Community and for Bella for helping with its compilation 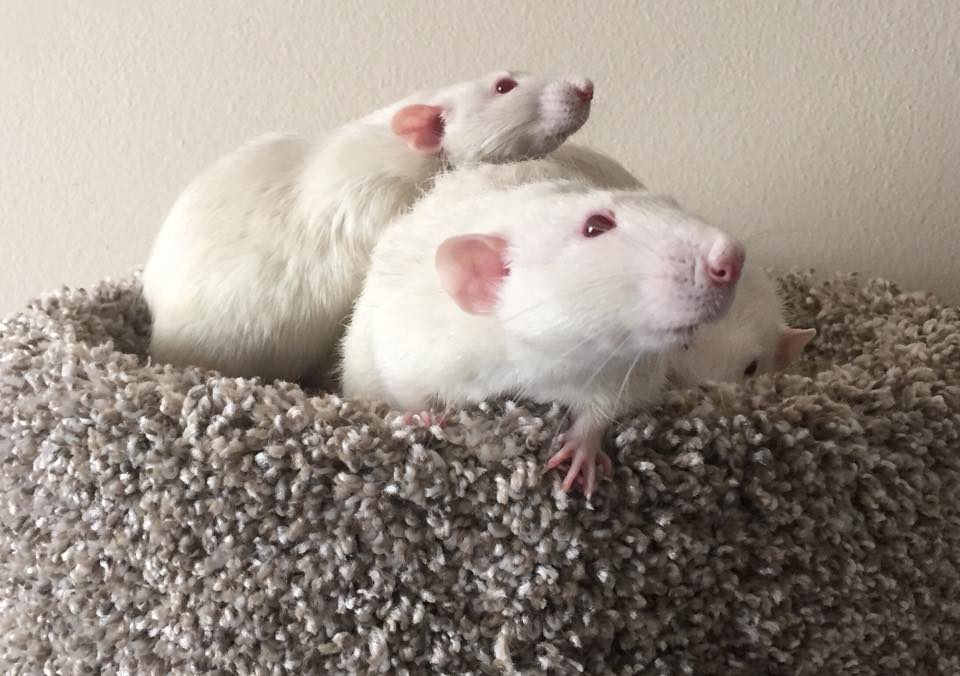 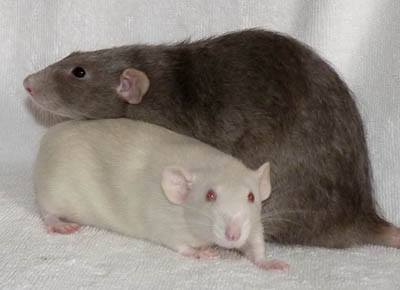 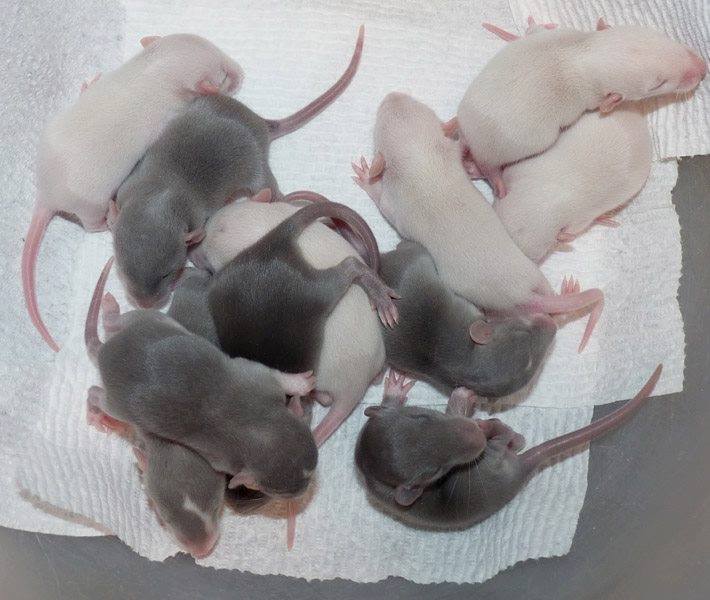 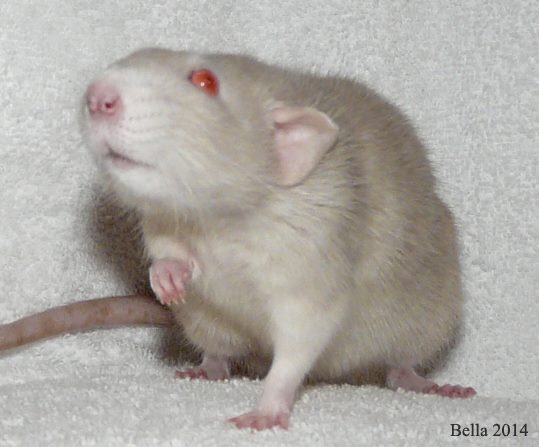 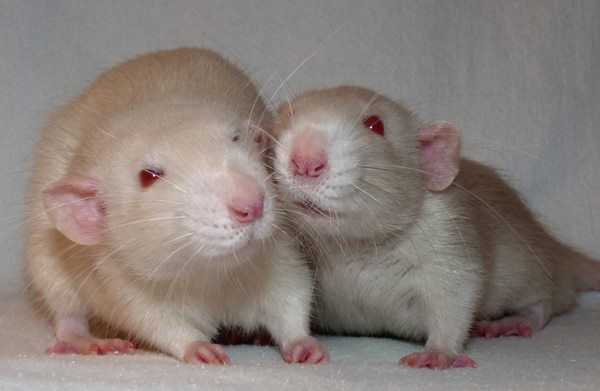 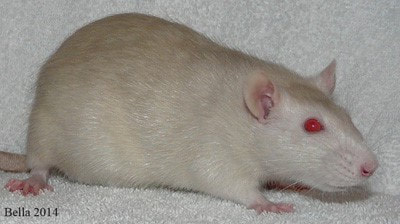 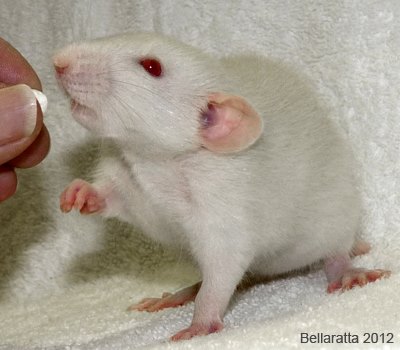 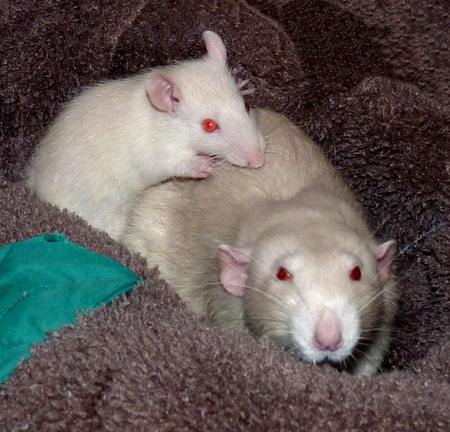 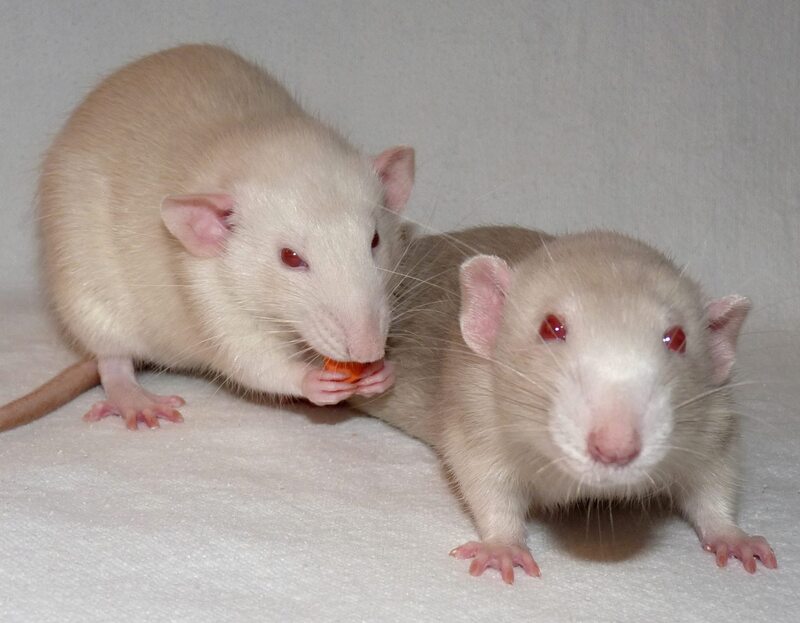 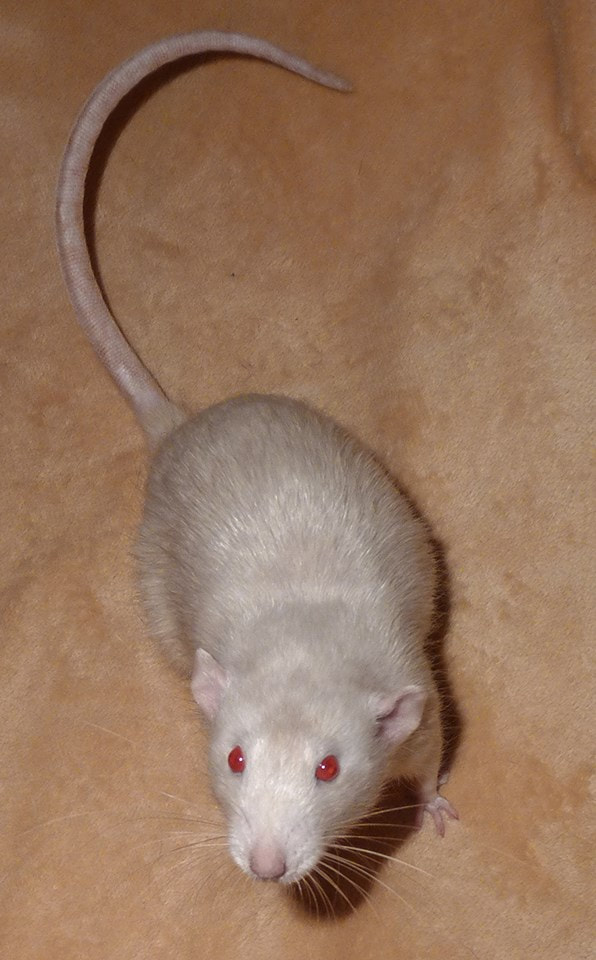 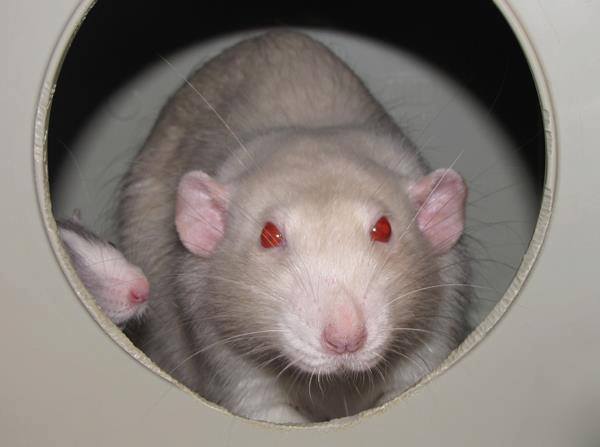 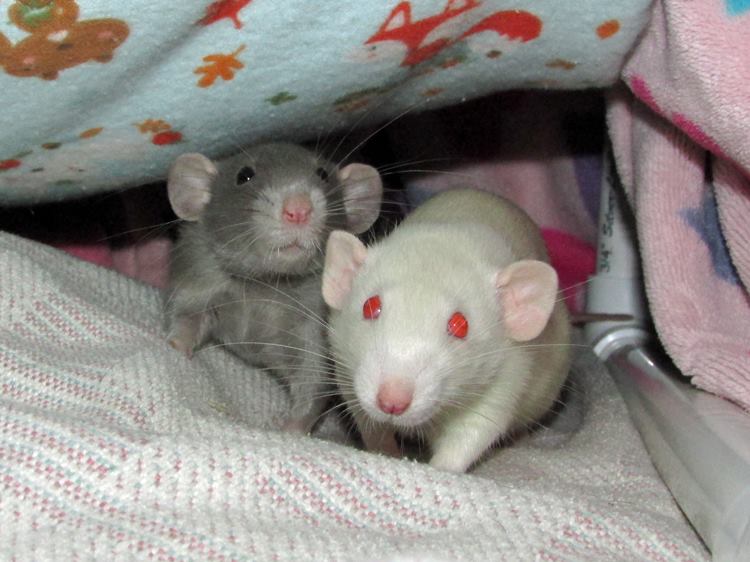 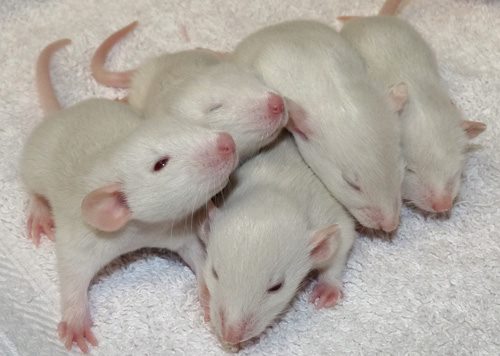 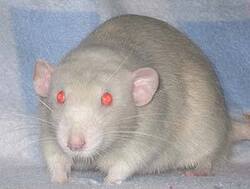 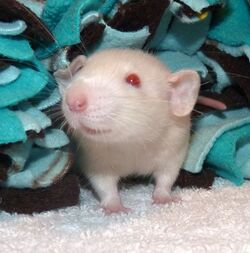 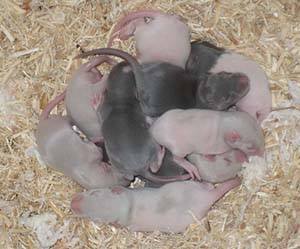 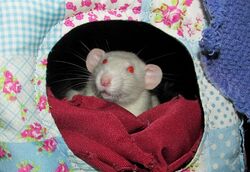 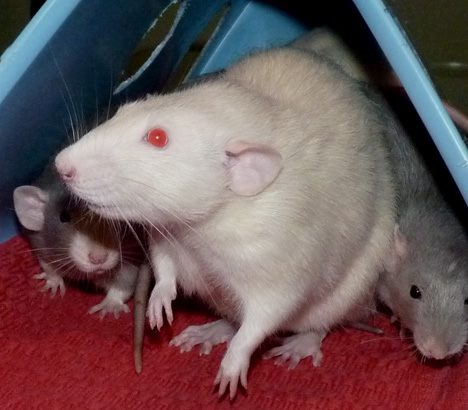 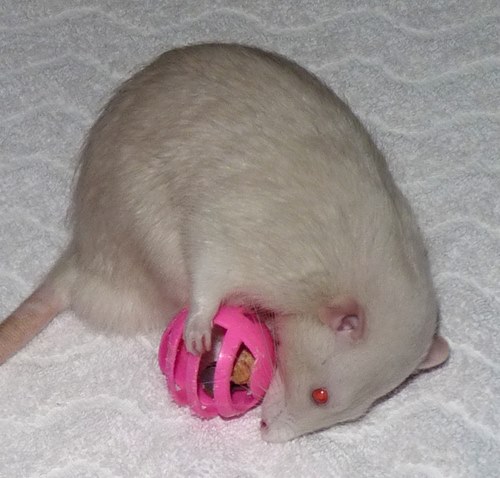 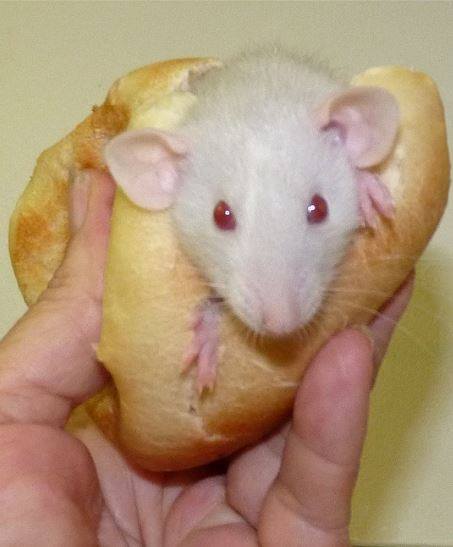 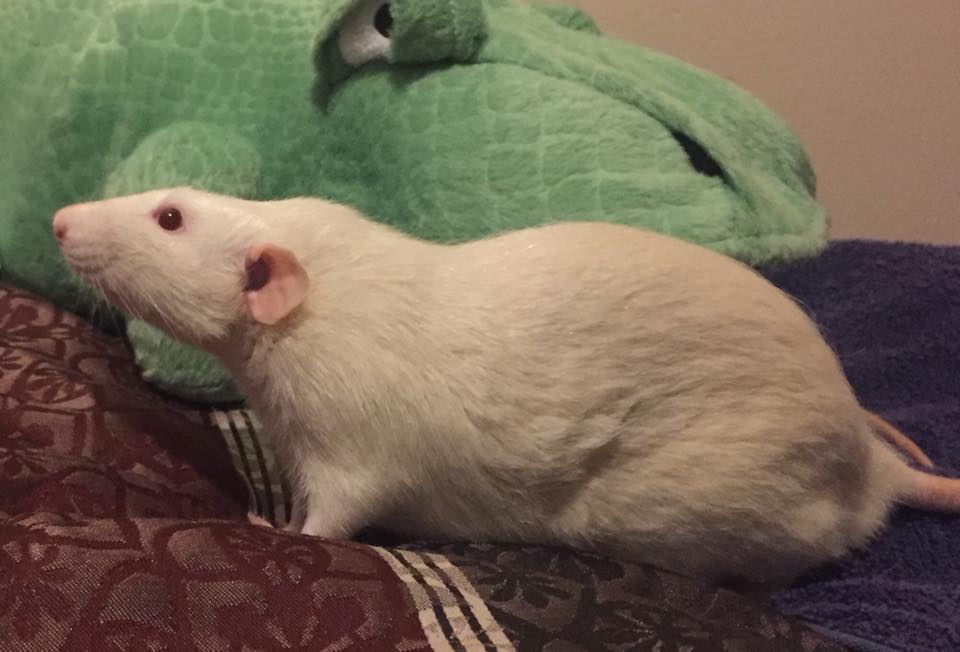 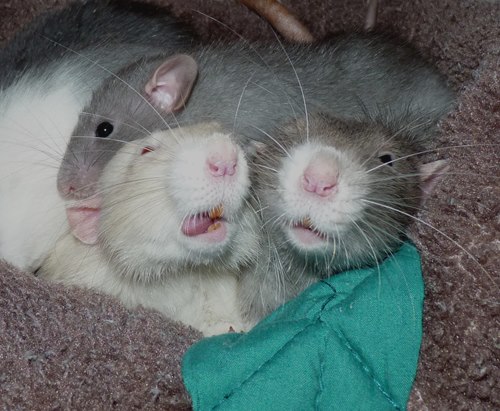 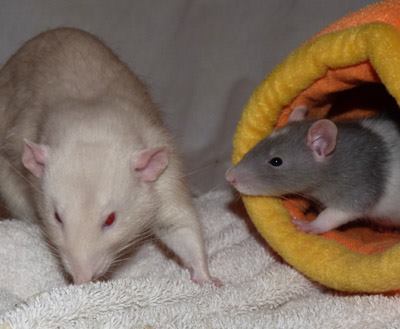 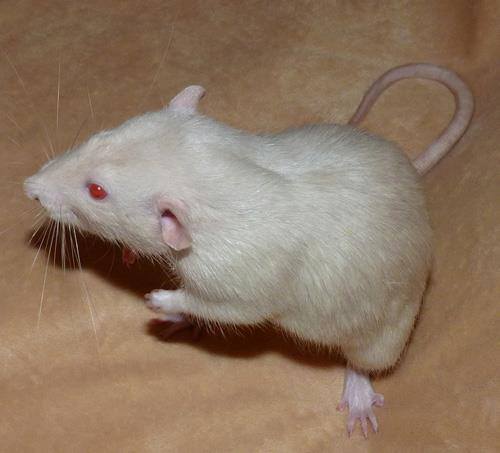